Gotta love a Friday afternoon. After all, for most it means no getting up early for work tomorrow. It’s that wonderful feeling of unwinding and having a drink (or 3) with a simple long lasting dinner.

Then, it’s Saturday. Time for a nice leisurely breakfast in your favourite cafe, on the balcony or in bed. At least that’s our Saturday mornings, especially since we both stopped going to work on them.

But back to Fridays…

I’m lucky enough to finish work pretty early in the afternoon so I get time to think of something fun to make and eat for dinner. Hence the name Fun Food Fridays.

I stopped off at our local supermarket on the way home and found the prettiest looking Eggplants and decided that baked spiced eggplant, fried haloumi and fresh tabouleh in crunchy lettuce leaves was exactly what I felt like (and a glass or two of a wonderful wine we bought back with us from the Barossa in South Australia.)

Eggplant cooked this way is easy, healthy and delicious. You just season it any way you like, bake it and serve it as part of any meal. It goes perfectly with haloumi…

All you’ll need is:

Slice the eggplant into 1cm thick slices. Brush lightly on both sides with olive oil the sprinkle on your fave seasonings.

Place in a single layer on a baking paper lined baking sheet and bake in a preheated 200oC oven for around 30 – 40 minutes.

While the eggplant was cooking I made a bowl of tabouleh and I pan fried some thick slices of haloumi.

We grabbed a lettuce leaf each, filled it with some tabouleh, a piece of haloumi and a slice of eggplant then rolled it up and dug in. 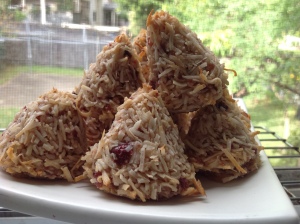 I made a batch of these macaroons for my sisters 40th birthday party on the weekend. They were well received. Several people asked for the recipe so I thought I’d do a blog post and share it with you as well.
I played with the recipe by adding different ingredients and really liked the cranberry macaroon, though they do taste just as good plain. Just leave out the cranberries and mix all the ingredients in a bowl.

These are very simple to make and look impressive piled up on a serving dish.

All you need is:-

Mix the coconut, sugar and salt in a large bowl. Add the cranberry and egg and mix with your hands until everything is well combined.

Form tablespoons of the mixture into whatever shapes you like (I used a teaspoon and my hand to form a cone shape but whatever’s easier for you. It will all taste the same)

Place them onto a baking paper lines baking sheet and cook at 130C for 20 – 25 minutes or until lightly brown. 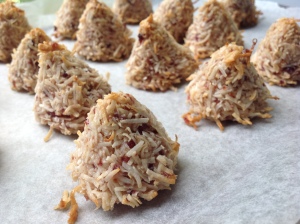 They store well for a week in an airtight container, but trust me, there won’t be any left to store.

It’s a public holiday here today. Besides a 30 minute spin on the exercise bike and ironing a few shirts I haven’t really done too much. It’s been good.

I was thinking about what I had in the fridge that needed to be used up and remembered I’d bought an eggplant a couple of days ago with the idea of making a pasta dish with tomato, eggplant and chilli but we went out for dinner instead. That was good too.

So I took the eggplant out and looked at it with the hope that it would let me know how it wanted to be cooked, and do you know what it suggested?  Yes, that’s right… NOT pasta with eggplant, tomato and chilli but potato, eggplant and tomato bake.

So I peeled a couple of potatoes, sliced them about 5mm thick, tossed them in a little oil and spread them on a baking sheet and baked them at 250c for 20 minutes.

Then I partially peeled that brilliant eggplant, sliced it about 1cm thick, spread it on a tray, splashed a little oil over those slices and sprinkled them with salt, cumin powder and fennel seeds and then baked them at 250c for 20 minutes.

Yes, it was all coming together.

Next I peeled a couple of really big cloves of garlic and a small onion and chopped them up nice and chunky. I put them in a large frypan with a little olive oil and a couple of sliced red chillies. I stirred them around for a few minutes on a medium high heat until they were soft then threw in a 400g can of italian cherry tomatoes (it was the contents of that can I threw in. I discarded the actual can), added a pinch of salt, a pinch of ground pepper, a pinch of sugar and about a tablespoon of dried oregano. Yum! I turned the heat down and let that wonderful sauce bubble away gently for 20 minutes. It was all good.

Next came the whole putting it together part of the program.

In a deep oven proof dish I spread a little of the sauce then arranged half the potato and eggplant slices on top. I spread half the sauce over that and enjoyed it so much I did it again Finishing with a layer of sauce. But I wasn’t done yet.

I put what I had created into the oven at 180c and commenced preparing a luscious white sauce which I would use as a cover.

Melting 20g of butter in that very same frypan I made the tomato sauce in, I added 1 tablespoon of flour and stirred it around for 30 seconds. No more no less. I then gradually incorporated 200ml soy milk. Oh the joy as it started to thicken and bubble.

Next I took it off the heat and added a sprinkle of salt and a single egg. Oh the whisking was brilliant, even if I do say so myself.

I brought the dish out of the oven and poured this amazing milky, eggy sauce over what I had already built, sprinkled on a few pieces of goats feta and a little mozzarella cheese then I had it back in the oven quick smart for 45 minutes. It was all bubbly and brown. Perfect I tell you.

To accompany this masterpiece – a salad and a glass of red.

I cooked and my husband cleaned.